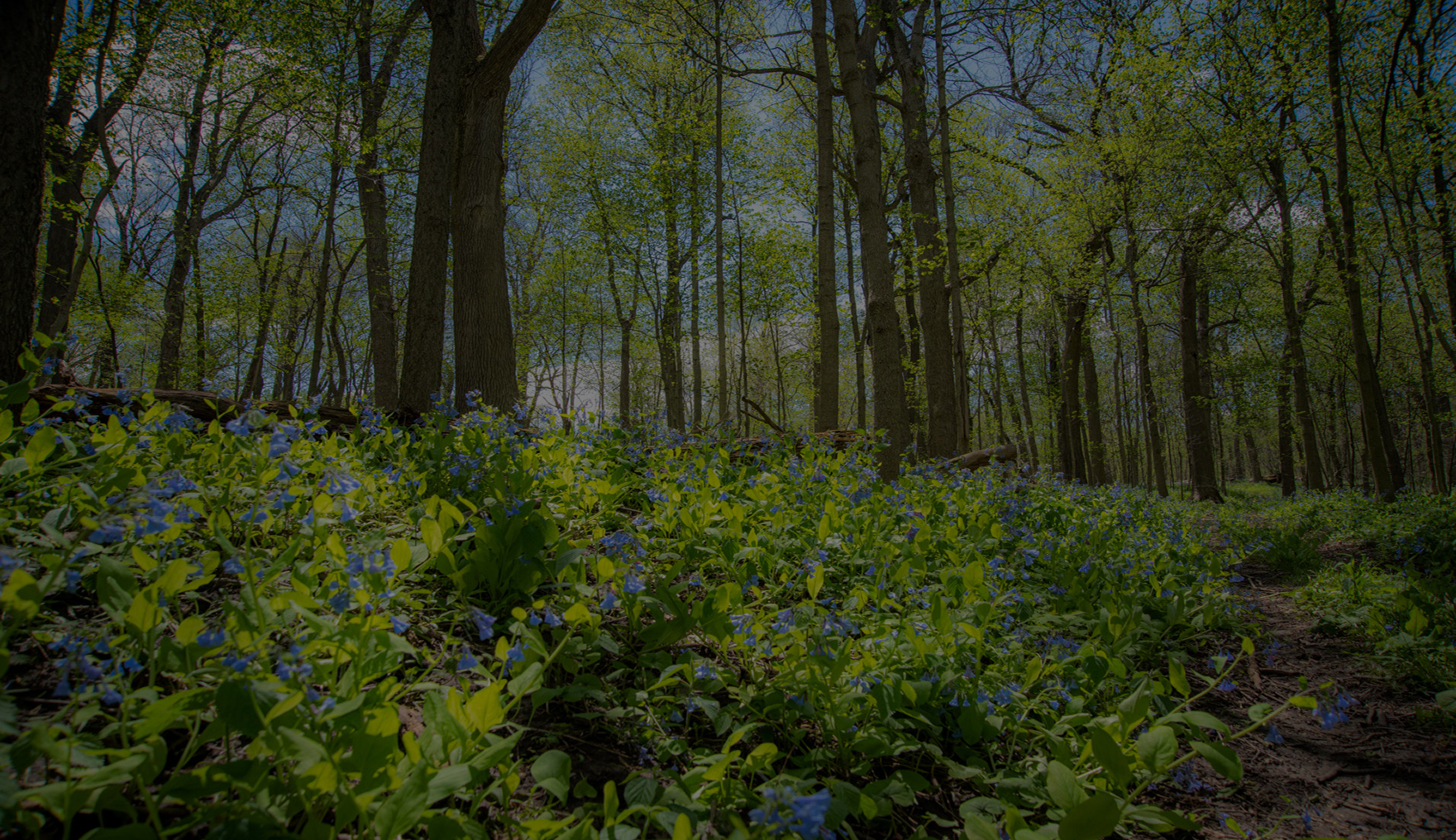 Elkhart, IL Wild Bluebell Flowers on Elkhart Hill - Welcome to the scenic Village of Elkhart. Make a stop through our historic downtown and up beautiful Elkhart Hill, a memorable stop on your Route 66 journey.

A hidden gem that cannot be missed along Route 66 is the charming village of Elkhart. A great first stop is downtown, Governor Oglesby Street, at the Visitor Center/Country Bumpkin. Then stroll the street and get a taste of the history at the Heritage Corner and Route 66 Silhouette Statue. Stay a while and enjoy a tasty lunch and shop at the quaint, vintage shops.

The history is also evident as you travel through the countryside, up Elkhart Hill; the highest elevation in Central Illinois at 777 ft above sea level. There is even a private section of the Hill that is part of the "Old Indian Trail - The Edward's Trace". This trail was used for thousands of years by the Native Americans, then was later frequented by pioneers and even traveling lawyer, Abraham Lincoln. Locally, the two distinct fragments on the Hill are one of only two sections of this ancient trail.

As you travel up the hill be sure and stop at the scenic Elkhart Cemetery. The entrance to the Cemetery is a Looking for Lincoln  stop that explains Abraham Lincoln's connection to Elkhart. The cemetery is the resting home to former two-time Illinois Governor & President Lincoln confidant, Richard Oglesby (Oglesby Mausoleum); as well as Capt. Adam Borgardus of Buffalo Bill Cody's Wild West Show, also know as the "Wingshot Champion of the World".

As you travel through the Elkhart Cemetery, you will also see the historic, St. John the Baptist Chapel and Gillett Memorial Bridge. This Episcopalian Chapel was built in 1890 by Lemira Parke Gillett, in memory of her husband John Dean Gillett. The bridge was built in 1915, by Emma Gillett Oglesby, in memory of her brother John Park Gillett (John Dean Gillett's son). Both, along with the farm at the top of the hill, were privately owned for 8 generations (until 2018) by the Gillett family. They continue to be privately owned by the Conn family- Historic Gillett Farm. The Chapel now hosts an annual Christmas Candlelight Service  on the first Saturday of December and is also used and reserved for special events.

See some of the scenic beauty of Elkhart is also captured in the works of Joshua Rhoades. Joshua is a local midwest astro and landscape photographer as well as a geologist. His love of the outdoors is evident in his work and the unique, profound way he captures the beauty that surrounds him. To learn more, visit his Website or Facebook Page.