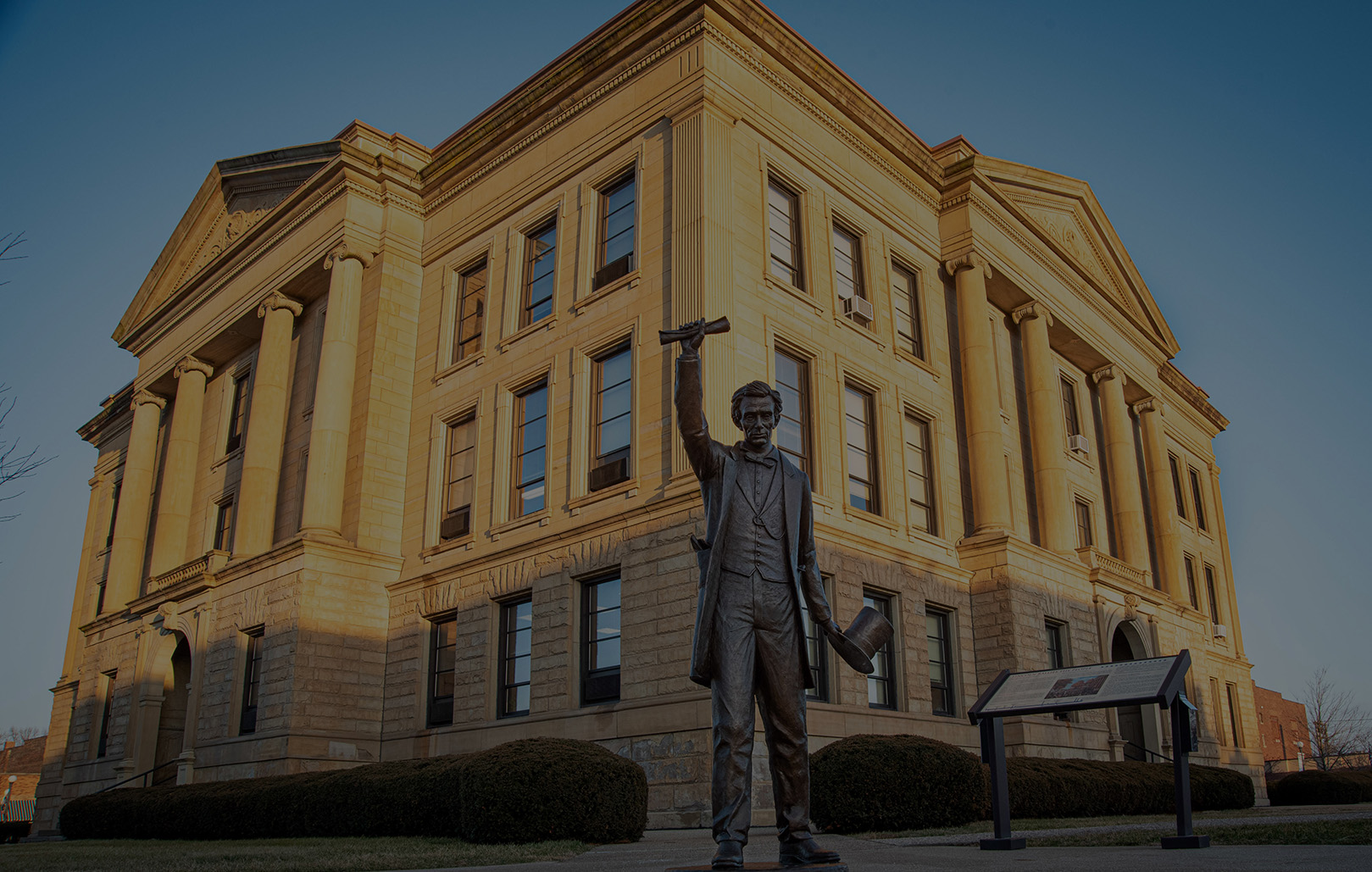 Lincoln, IL Logan County Courthouse - Welcome to Lincoln, the largest city and the county seat of Logan County. It is also home to deep rooted Abraham Lincoln and Route 66 history.

The City of Lincoln was founded in February of 1853, by three men: Virgil Hickcox, a director of the railroad; John D. Gillett, a cattle raiser known as "Cattle King of the World" in future years; and Robert B. Latham, the Sheriff of Logan County. Lincoln's location was ideal for connecting Springfield to Bloomington via the newly constructed railroad, as well as easy access for waterways (Kickapoo, Salt, and Sugar Creeks).

The history is rooted deep here from Abraham Lincoln and renowned authors William Maxwell and Langston Hughes  to the many businesses that thrived on the "Mother Road" during the Route 66 era.

On August 27, 1853, 90 lots were sold and Abraham Lincoln was present. He purchased a watermelon from a nearby wagon, cut it open and christened the new town with the juice of the watermelon. Thus the town became the first town named after Abraham Lincoln prior to his presidency. The county seat was also moved from Mt. Pulaski to Lincoln, where it continues to be the county seat today. A visit to the Logan County Visitor Center/Historic Train Station includes seeing a bronze statue of the Christening Scene inside, as well as a visit to the south lawn to see the original Christening Site.

Mr. Lincoln was no stranger to Lincoln and Logan County at this point. He had served first as a surveyor and then as a traveling lawyer on the 8th Judicial Circuit  throughout Logan County. A great stop to learn more about this is the Postville Courthouse. This replica courthouse was built for the Lincoln Centennial, in 1953, on the original location of the first Logan County Courthouse, that was used from 1840-1847. The city also has mutliple historical markers that tell even more of the many connections to Abraham Lincoln.

Abraham Lincoln also worked as a Railsplitter- splitting logs, clearing land and building fences for other farmers, when he was younger. This became part of his presidential campaign slogan in 1860, he became know as "the Railsplitter". This drew in the support for Lincoln from the working class, he would be defined as "a man of the people" coming from humble beginnings. The city of Lincoln developed the Abraham Lincoln National Railsplitter Festival  in 1970 in honor of President Lincoln.

Lincoln's history doesn't stop at Abraham Lincoln. Lincoln later became a popular stop along the historic Route 66,  beginning in its infancy, in 1926. Today many travel from around the globe to drive on this iconic "Mother Road", stretching from Chicago, Illinois  to Santa Monica, California. Today the city of Lincoln has preserved some of the iconic stops from those days:

Learn more about the City of Lincoln