The Mill Museum on 66

The Mill Museum on 66

Be sure and save time to stop at The Mill Museum on your Route 66 journey. It is not often that you come across an original building on Route 66, but The Mill Museum is just that. In 1929, The Mill was originally opened as The Blue Mill, on what was first know as Route 4 (old Route 66). The original construction and aesthetic of the building was Dutch-themed. The exterior was painted white with blue trim and featured a revolving windmill that lit up, while the interior was Dutch blue. The waitresses’ uniforms also consisted of white dresses with blue-trimmed aprons.

Over the years the restaurant changed hands and the aesthetic changed to red and white but the windmill theme remained. When people remember The Mill, they know it as the “Home of the Schnitzel”. It was a HUGE, fried, breaded sandwich (originally made from veal, but later pork) that made the patrons return again and again for decades.

The Mill Restaurant closed to the public in 1996 and stood deteriorating for many years. In 2005, The Mill was sold for taxes, but the new owner could not afford to demolish it. A year later, then Logan County Tourism Director, Geoff Ladd, stepped up to work with Ernie Edwards (owner of the famous Pig Hip restaurant on Route 66) and other supporters in an effort to save the building.

The Mill was inducted into the Route 66 Association of Illinois' Hall of Fame on June 13, 2009.

Almost 12 years later, on April 29th, 2017, The Mill officially re-opened as The Mill Museum on 66. The Mill Museum has Route 66 memorabilia as well as exhibits from the original Mill Restaurant, The Tropics, and The Pig Hip. All were iconic Logan County restaurants during the Route 66 heyday!

The Logan County Tourism Bureau took over ownership of The Mill Museum in February of 2020 and welcomes visitors to this iconic destination! 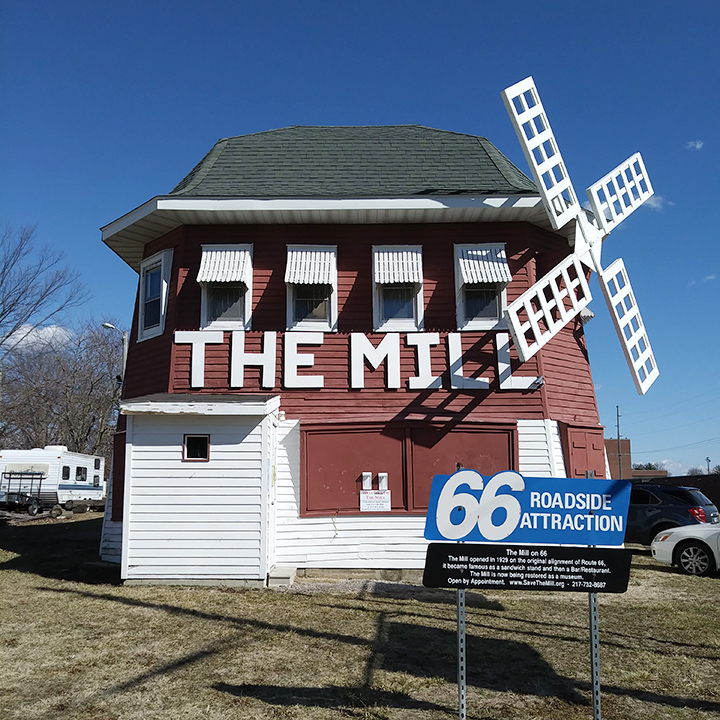