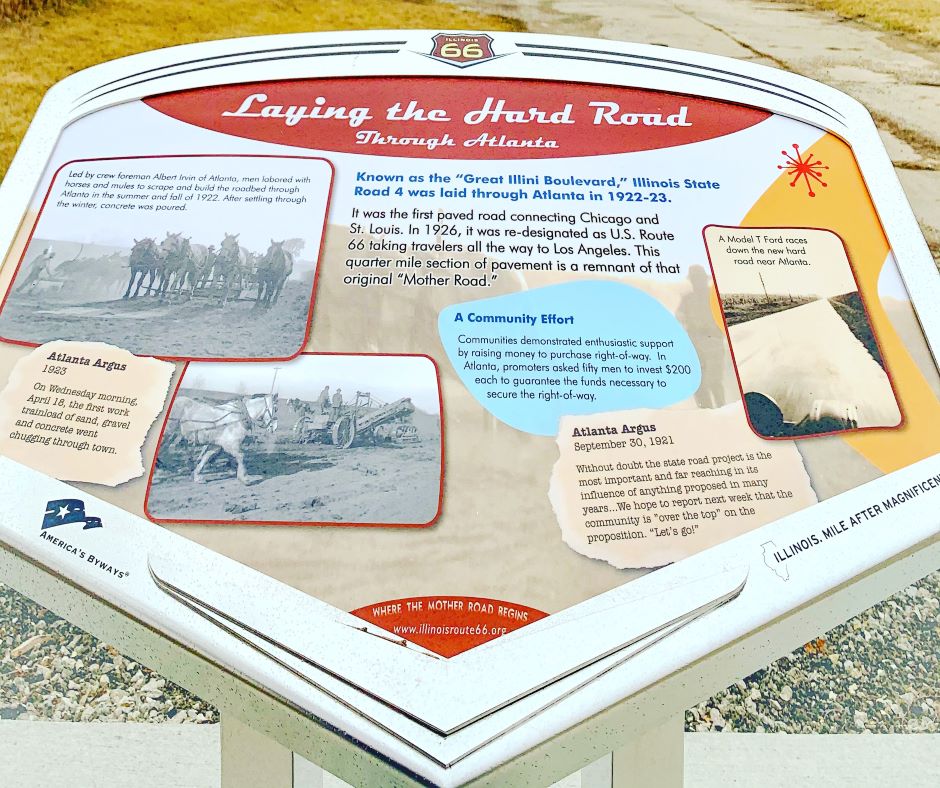 Located on the north edge of Atlanta, the exhibit features an original section of concrete roadbed constructed in 1924 when Illinois Route 4 became the first paved road through Logan County. Part of the state’s effort to connect Chicago to St. Louis with an all-weather path, the road’s name was changed to Route 66 in 1926 when it became an alignment of the new U.S. Highway System.

The featured section of the road was abandoned after World War II when a Route 66 bypass was installed around Atlanta. This driveable exhibit seeks to give visitors a feel of what it was like to travel Route 66 circa the late 1920s/early 1930s. The approximately one-quarter-mile stretch of highway maintains its original 18ft width, allowing only 9ft wide lanes for traveling vehicles. Items installed along the sides of the road include a period-appropriate yellow stop sign [a color scheme eventually abandoned due to how difficult it was to see after dark], replicas of the original speed limit and Atlanta population signs, as well as the classic black/white Route 66 shield, which at one time marked the entirety of the road from Illinois to California. A period billboard at the alignment’s south end presents visitors to Atlanta with a fun photo op featuring an iconic image of a family road trip, complete with mom, dad, kids, and dog in the car’s backseat. An Illinois Route 66 Scenic Byway Program interpretive panel sits at the north end of the exhibit to tell the story of how horse and mule teams were used to grade and build this stretch of road through Logan County.

The Historic U.S. Route 66, Illinois Route 4 Driving Exhibit does not have an address. It can be reached by driving to where NE Arch Street meets Sycamore Street. If searched for via Google Maps, the exhibit is across from the Holland Trucking Company complex. The driving exhibit is open all day, every day, with a solar-powered light over the Scenic Byway’s interpretive panel for those visiting during evening hours. Note, however, that the road dead-ends at the parking lot on its north end and may not be suitable for cars with trailers/campers or large RVs over 40ft.